On April 22nd, Scouts from Troop 60 retired flags in a solemn ceremony.

Scout plays “America The Beautiful” on the double bass.

Thank you for joining us on this beautiful day for a flag retirement ceremony! Today is Earth Day, when—worldwide—people celebrate and hold events commemorating environmental protection. The Boy Scouts of America have an Outdoor Code, which states: “As an American I will do my best to be clean in my outdoor manners, to be careful with fire, to be considerate in the outdoors and to be conservation minded.” In all of our outdoor activities, Troop 60 Scouts strive to be worthy of our beautiful American land.

The flag of the United States is probably one of the most easily recognized national flags in the world. Its bright blue rectangular canton—called the “union”— proudly bears 50 crisp white stars representing the 50 states of the United States of America, with 13 horizontal red and white stripes representing the 13 original British colonies that declared independence in July 1776. Our flag is a powerful symbol of our nation, and in the words of John Adams and Benjamin Franklin, symbolizes a “new constellation.”

Please join us in singing the United States National Anthem, “The Star-Spangled Banner.”

Oh, say, can you see, by the dawn’s early light,

What so proudly we hail’d at the twilight’s last gleaming?

Whose broad stripes and bright stars, thro’ the perilous fight,

O’er the ramparts we watch’d, were so gallantly streaming?

And the rockets’ red glare, the bombs bursting in air,

Gave proof thro’ the night that our flag was still there.

O say, does that star-spangled banner yet wave

O’er the land of the free and the home of the brave.

In 1923, the Federal Government released the single official source for flag etiquette, called the Flag Code. It states, “The flag, when it is in such condition that it is no longer a fitting emblem for display, should be destroyed in a dignified way, preferably by burning.” The Code, written well before the common use of synthetic fabrics, directs us to not simply dispose of flags but to destroy them in a dignified, respectful manner so that they can no longer be displayed.

As you heard during our Scout Oath, “On my honor I will do my best to do my duty to God and my Country,” Boy Scouts respect the United States Flag. Scouts also make a point of respecting the precious environment that is our nation too.

Having accepted flags from the community that have fulfilled their service and are no longer in proper condition to proudly represent our great nation, we must separate the cotton from the synthetic flags as you can see here.

The synthetic flags, which would release dangerous toxins and fumes if burned, are somberly parted: the red and white stripes and the blue fields of stars are carefully and solemnly cut so that the fabric no longer represents the United States of America. This method is recommended by the US Scouting Service Project, among other sources. We give these remnants a dignified burial as befits Old Glory.

[One at a time, Scouts use the shovel to cover over boxes with soil.] 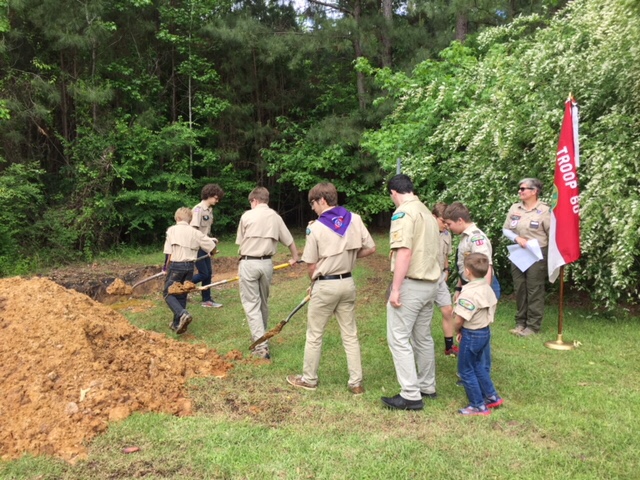 The flags made of cotton material will be retired safely here in this fire. Please remain silent as the Scouts retire the cotton flags.

[Scouts retire flags, one at a time, with an adult leader signaling when the next flag can be safely placed on the fire.]

That concludes this ceremony. Thank you for attending.

Troop 60 Scouts are happy to accept worn or dirty 100% cotton flags from community members, and ask only that the story of the flag–where it was flown, any veteran associated with it, and so forth–be shared with the Scout receiving the flag so we can tell its story at retirement. Nylon and polyester flags are more difficult for the Troop to handle because we cannot burn them and don’t have the funds to pay for recycling. Instead, we ask that synthetic flags be sent to either of the following for respectful retirement:

Stars for our Troops

We encourage local patriots to replace their worn and unserviceable flags with Made in America 100% cotton flags.